As the various Robins convene and compare notes, Jason Todd finally admits why he has deeply resented the Dark Knight for his entire superhero career.

You Are Reading :DCs Fallen Robin Revealed Why He Resents Batman and He Has a Point 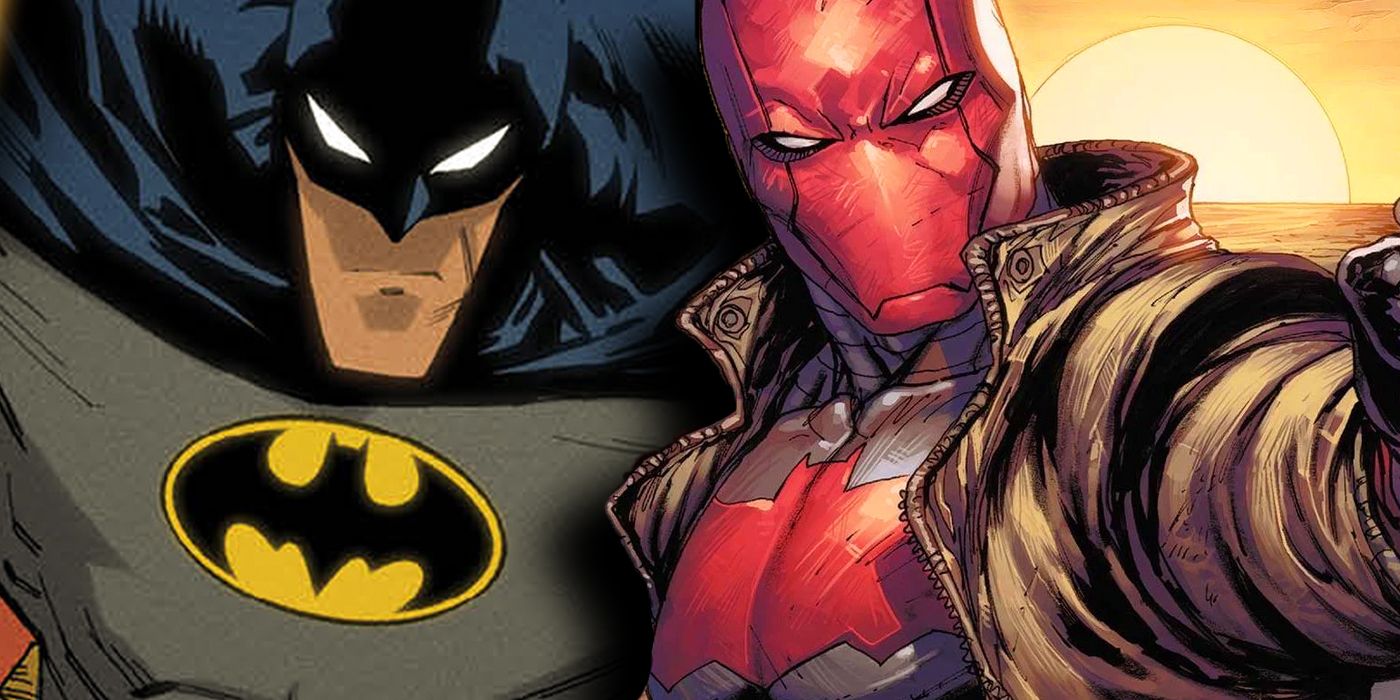 WARNING: The following contains spoilers for Robins #1, on sale now from DC Comics.

Of all the characters in the DC Universe to have donned superhero mantle of Robin, none have a more complicated, volatile relationship with the rest of the Bat-Family than Jason Todd. With his tenure as Robin being cut short by being murdered by the Joker, Jason’s new lease on life saw the second Boy Wonder come back more violent than ever, initially as a lethal antihero that took on the mantle of the Red Hood. And while Jason has dialed down his willingness to kill his enemies and has been largely welcomed back into the Bat-Family, the former Robin reveals the origins of his deep-seated resentment towards Batman.

The first issue of Robins — by Tim Seeley, Baldemar Rivas, Romulo Fajardo, Jr. and Steve Wands — as the various heroes that wore the mantle of Robin team up to dismantle a cult operating out of Bludhaven that have styled themselves after the late antihero Anarky. As the former sidekicks all regroup the morning after and bond over a hearty breakfast, they each compare notes on their time as Robin and being half of the DCU’s most famous Dynamic Duo alongside the Dark Knight. And when it falls on Jason to reflect on his time as Robin, the most streetwise Boy Wonder of them all observes that he is the only one at the table who never really signed up for the superhero life in the first place. 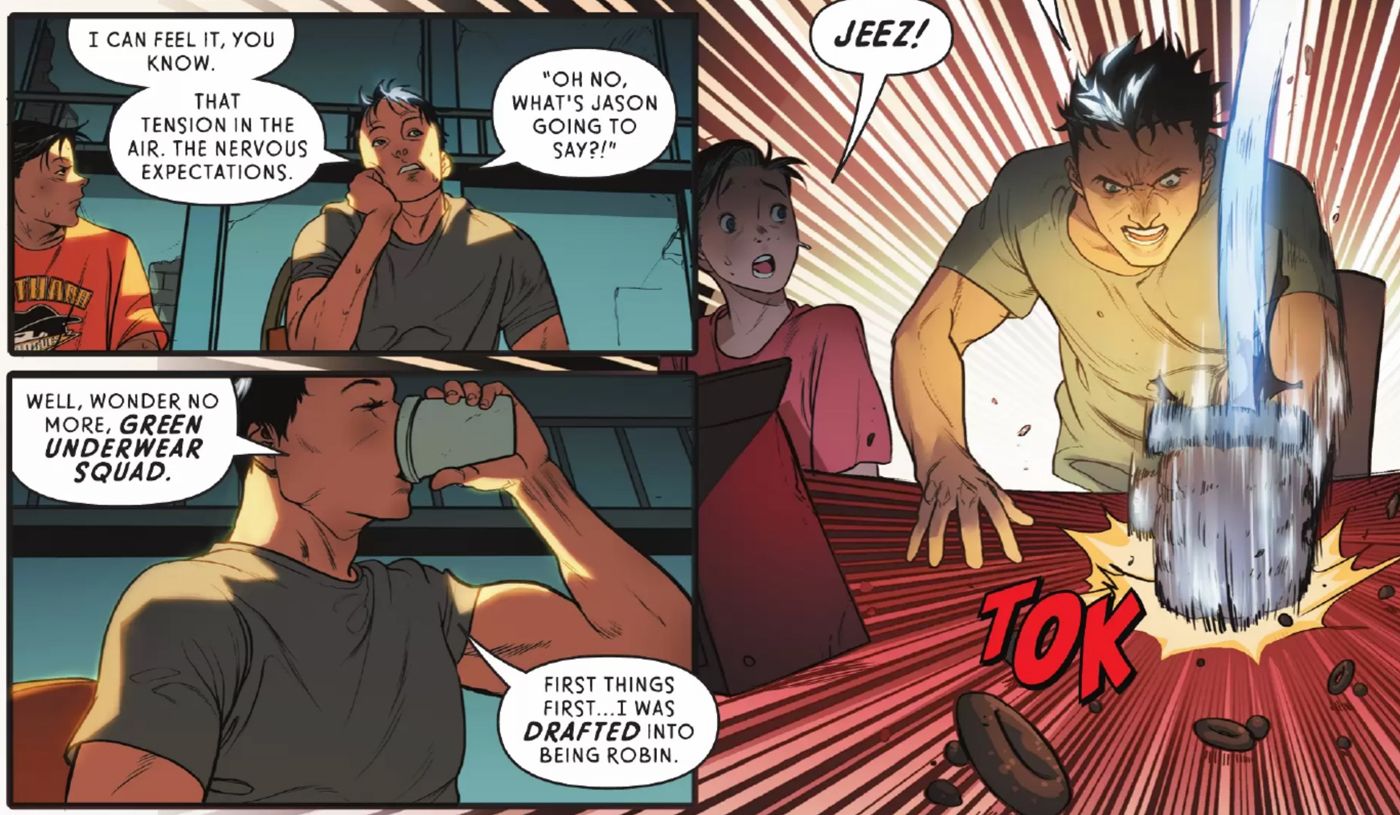 Jason recounts how he wasn’t adopted by Bruce Wayne, like many of his counterparts, or a willing volunteer into Batman’s never-ending war on crime but rather a draftee. After the Caped Crusader discovered Jason while the young boy was attempting to steal the tires from the Batmobile while it was parked in Crime Alley, he forcibly brought him back to the Batcave and selected him as the new Robin after Dick Grayson quit the role to create his own superhero mantle as Nightwing.

And even beyond being coerced into a career as a crimefighter, Jason recalls that he wasn’t even allowed to die before being resurrected by the Lazarus Pit after his fatal run-in with the Joker. 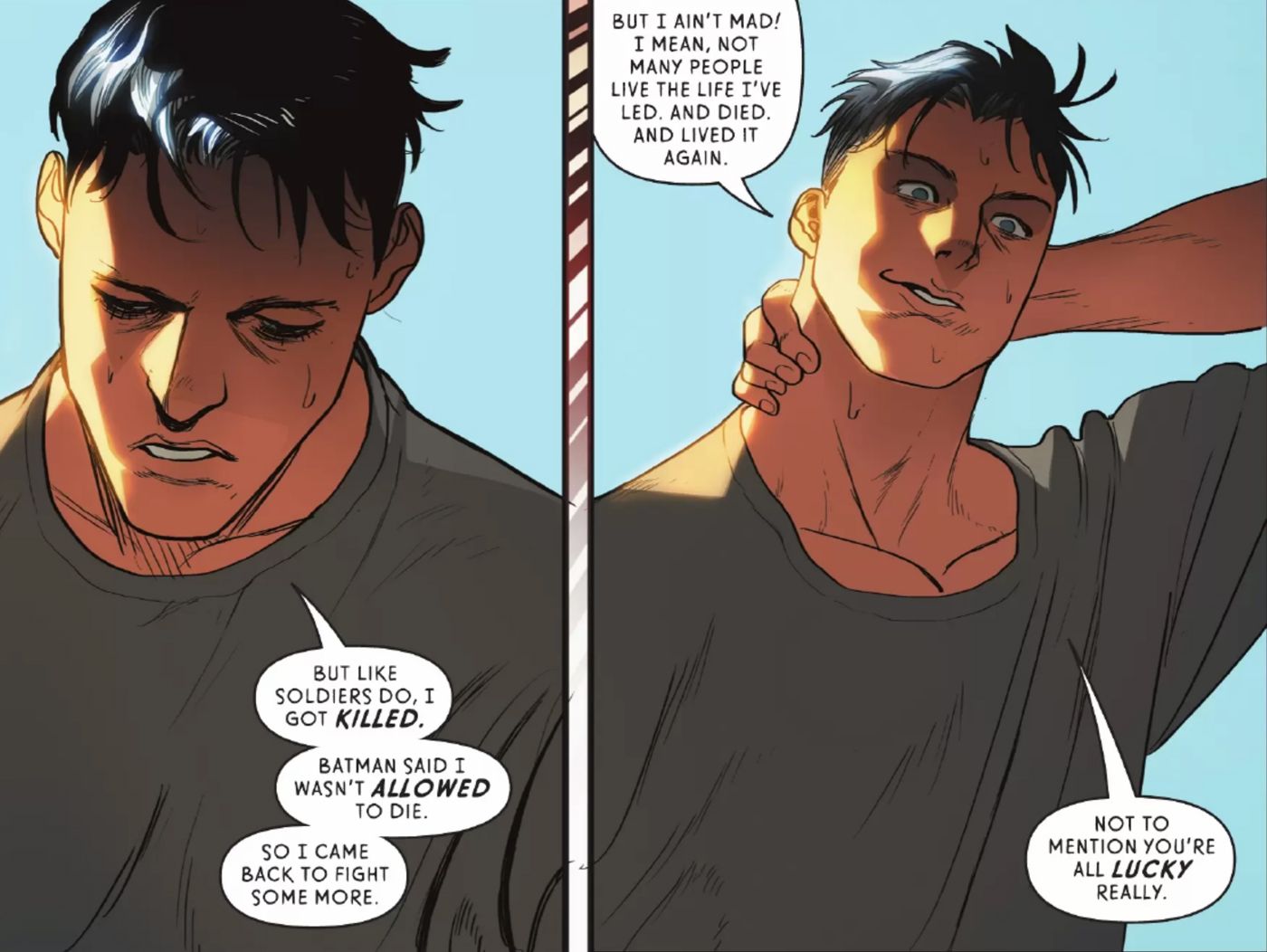 Jason has previously pointed out that much his animosity against Batman was fueled when he learned that his old mentor didn’t even move to avenge his death by killing the Joker but rather allowed the supervillain to survive and continue to terrorize Gotham City. This led Jason to take a more proactive and lethal approach towards dealing with criminals when he first took on the alter ego of the Red Hood, initially intending to take over Gotham’s criminal underworld himself in order to better take control of it while targeting supervillains like the Joker and Black Mask.

Despite this troubled, coercive start to his superhero career, Jason insists to the assembled Robins that this doesn’t make him angry now, years later. Jason muses that had Batman not caught him attempting to steal his tires, there is a strong likelihood that he could have become the very kind of criminal that the Bat-Family regularly fights against. Jason has always been something of a troubled figure in his post-Crisis origin and, though he has repeatedly proven himself to be a superhero in his own right and valuable ally to the Bat-Family, he has not forgotten that his crimefighter career is one battle he never actually signed up for in the first place.